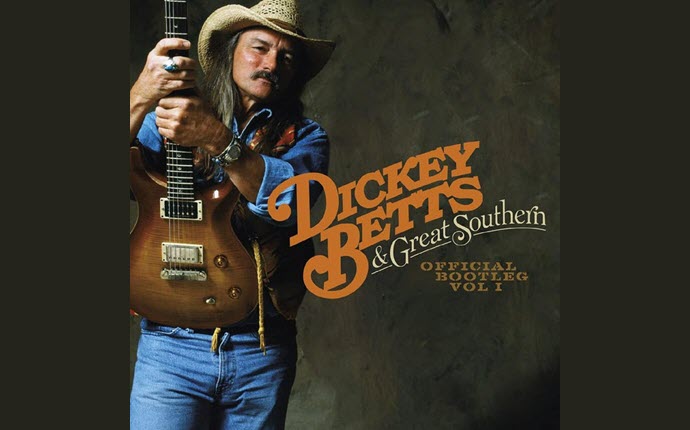 The release includes extensive liner notes by long-time follower of Betts’ career, Wade Tatangelo. His comprehensive review of the set for the Sarasota Herald-Tribune is available online:
REVIEW by WADE TATANGELO – SARASOTA HERALD-TRIBUNE

Disc 1 starts with Dickey’s lyrical instrumental, “High Falls” and then kicks it into high gear with “Good Time Feeling.” Fan favorite “Blue Sky” is next, with a “Franklin’s Tower” inspired intro.

A hard-driving rendition of “Nobody Knows” sung by Kach is next, who also does the vocals on Robert Johnson’s “Steady Rolling Man.” Dickey picks up the vocals on a rollicking “Southbound” and the high-spirited “Having a Good Time.” Disc 1 closes out with the reflective lyrics of “Seven Turns,” based on the Navajo legend that everyone faces seven key decisions in their lives.

The second disc opens with a 30-minute rendition of “In Memory of Elizabeth Reed,” Betts’ signature instrumental that many of us first heard on the Allman Brothers Band’s “At Fillmore East.” Mike Kach’s “It Happens Sometime” is next, followed by “Back Where It All Begins,” the lead song from the Allman Brothers’ “live studio” album recorded in 1994 on Burt Reynold’s soundstage in Jupiter, FL.

Next up is Betts’ huge hit “Ramblin’ Man,” the only Allman Brothers Band single to reach #1 on the Cashbox Top 100 and #2 on the Billboard Hot 100. This is followed by a sublime version of the Grammy-award winning instrumental “Jessica,” and the album closes out reflectively with Betts’ “No One To Run With.”