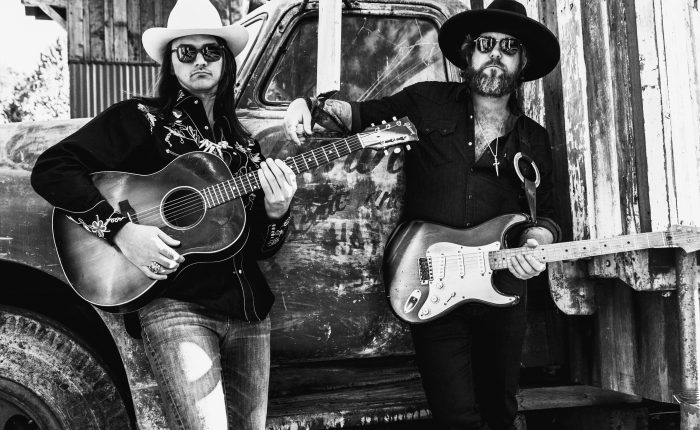 New York, NY – April 18, 2019 – The Allman Betts Band have signed a new global recording agreement with BMG to release their forthcoming debut album Down To The River. Led by Devon Allman, son of founding Allman Brothers Band keyboardist and singer, Gregg Allman, and Duane Betts, son of founding Allman Brothers Band guitarist and singer, Dickey Betts, the album was recorded at the famed Muscle Shoals Sound Studios with producer Matt Ross-Spang (Jason Isbell, Margo Price, John Prine and Elvis Presley). Down To The River is slated for release this June.

Allman said, “We’re really psyched to have a machine like BMG get behind The Allman Betts Band! We look forward to expanding our brand and music into the international arena with such a professional team.”

Betts said, “We are very happy to start a great relationship with a powerhouse like BMG and look forward to the release of our debut record.”

John Loeffler, EVP, Repertoire & Marketing, New York, said, “The Allman Betts Band is creating a new level of timeless Southern Rock. Their musicianship, vocals, and songwriting are astonishing – and this is just their first recorded album as a band!  We are extremely grateful to be releasing their album, alongside Dickey Betts’ new Live album and concert film this summer. It is an honor to be part of this ongoing legacy and we look forward to working beside and supporting this band for years to come.”

The beginning of the partnership between Devon Allman and Duane Betts goes back to the Gregg Allman tribute show at the Fillmore in San Francisco. It was time, in that historic venue, to pass the spirit to the next generation. It was time to take all the lessons of the past, all their collective experiences, and make something new.

Following that concert, Betts would go on to serve as an opening artist on the Devon Allman Project 2018 world tour, joining Allman each night for a musical tip of the hat to their respective fathers. The year-long trek was the first to pair Allman and Betts, tallying nearly 100 dates across the US and internationally, and increasingly drawing larger audiences with each successive leg.

After a successful year of touring, the sons of Gregg Allman and Dickey Betts officially joined forces to form a new group together. Their first call was to old friend Berry Oakley Jr., son of the Allman Brothers Band’s founding late bassist, Berry Oakley, and floated the idea of joining them. The trio’s musical friendship traces back to The Allman Brothers Band’s 20th anniversary summer tour in 1989 when the three first met, and often sat-in with the Rock-And-Roll Hall of Fame inductee. They then recruited seasoned players from the Project ensemble: slide guitar sorcerer Johnny Stachela, drummer John Lum, and percussionist R Scott Bryan (Sheryl Crow). In November of 2018, they announced the formation of The Allman Betts Band.

About BMG
BMG is the new model music company founded by Bertelsmann in 2008 as a direct response to the challenges of music’s digital revolution. Key to its innovative approach is the fact it represents the traditionally separate music publishing and recording rights off the same state-of-the-art platform internationally. BMG is already the world’s fourth biggest music publisher and the first new global player in the recordings business in decades. BMG’s pitch is unique – a relentless focus on fairness and transparency and service to its artist and songwriter clients. BMG’s 15 offices across 12 core music markets now represent over 3m songs and recordings, including the catalogues of Chrysalis, Bug, Virgin, Mute, Sanctuary, Primary Wave and Talpa Music, as well as literally thousands of artists and songwriters attracted by its fresh approach. BMG is owned by international media, services and education company Bertelsmann, which also includes the broadcaster RTL Group, the trade book publisher Penguin Random House, the magazine publisher Gruner + Jahr, the service provider Arvato, the Bertelsmann Printing Group, the Bertelsmann Education Group, and Bertelsmann Investments, an international network of funds. With its multi-platform perspective, integrated technology platform and commitment to help artists maximize their income, BMG aims to be the best company in music to do business with. www.bmg.com