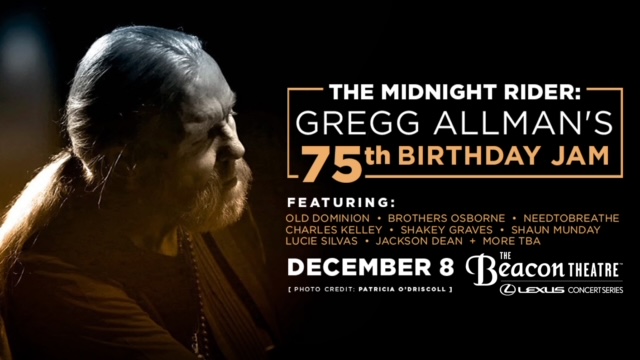 The life and legacy of the legendary Gregg Allman will be celebrated with a very special
all-star concert event. Produced by Lindsay Lehman and Wally Wilson in association
with Allman’s longtime friend and manager Michael Lehman, “The Midnight Rider:
Gregg Allman’s 75 the Birthday Jam” features musical director Kenny Greenberg and
happens on what would have been Allman’s 75th birthday, December 8, at one of the
late Rock & Roll Hall of Famer’s favorite venues, New York City’s historic Beacon
Theatre.

Though his passing in 2017 has left a vast musical space that can never truly be filled,
“The Midnight Rider: Gregg Allman’s 75th Birthday Jam” marks a remarkable valedictory
and memorial to a true giant of American music, now and forever. Born December 8,
1947 in Nashville, TN, Allman was undoubtedly among rock ‘n’ roll’s greatest and most
significant artists, his soul-fired and utterly distinctive voice still one of the defining
sounds in all of American music. From his founding role in the one and only Allman
Brothers Band to his long and storied solo career, Allman consistently proved himself to
be an iconic singer/songwriter and exceptional practitioner of the American blues
tradition. The award-winning author of such modern standards as “Midnight Rider,” “It’s
Not My Cross To Bear,” “Dreams,” and “Whipping Post,” Allman accrued a remarkable
list of honors over his five decade musical journey, including the Allman Brothers Band’s
1995 induction into the Rock and Roll Hall of Fame and 2012 Lifetime Achievement
Award at the 54th Annual GRAMMY® Awards. Allman detailed his brilliant career in
2012’s critically acclaimed, New York Times best-selling memoir, My Cross To Bear,
chronicling a truly astonishing life burdened by unimaginable loss, alcohol and drug
addiction, told with clear-eyed wisdom and sharp hindsight.