Let’s Get Together / The Collectors #1

This set essentially pairs two different Dickey Betts solo projects into a double-disc package, both previously released. The first, The Collectors #1, is a rarities set from Betts‘ Great Southern project. The feel is loose, and the music ranges from the Celtic “Beyond the Pale” to the loose Western swing feel on a cover of Billy Joe Shaver‘s “Georgia on a Fast Train,” the shuffling country reading of Bob Dylan‘s “Tangled Up in Blue,” and a B.B. King-inspired reading of “Change My Way of Livin’ #2.” Essentially this is the acoustic side of Great Southern, proving Betts didn’t need to plug in his Les Paul to shine. The second disc in the series Let’s Get Together was originally released in 2001 on his Free Falls Entertainment label. The Dickey Betts Band was formed in the aftermath of his being fired fromthe Allman Brothers Band in 2001. Betts wasted no time assembling a stellar unit of players who were as capable of throwing down in the studio as on the road. This set, with its amazing range of music from hard blues and jump and Gypsy swing jazz to country-rockers and rhythm & blues shuffles is crackling with energy. The most notable cuts on it are his originals “Tombstone Eyes,” “One Stop Be-Bop,” and “Rave On” (not the Buddy Holly tune). [A side note: this set was re-released in 2007 with the albums in reverse order, but aside from that, it’s exactly the same collection.] 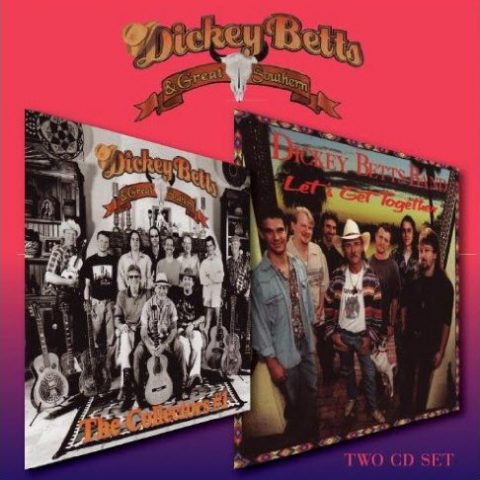