Anyone who misses the original Allman Brothers Band sound need look no further than this live triple-CD set, recorded at the Odeon in Cleveland, OH, on March 9, 2004, to find it. Not that the band doesn’t put its own stamp on the material, starting with a bracing and gorgeous rendition of Duane Allman‘s “Little Martha,” but the two-guitar attack, courtesy of Dickey Betts and Dan Toler, touches some familiar sonic territory, and David Stoltz (bass), Frankie Lombardi (drums), and Michael Kach (keyboards), filling out the ranks of Betts‘ band Great Southern, sound more like the Allmans of old than the current band circa 2004/2005 does. The repertoire ranges freely through current originals,Allman Brothers classics, and the band’s adaptations of blues standards such as Robert Johnson‘s “Steady Rolling Man,” which sounds like it could’ve come off of the Idlewild South album. The sound is excellent and the swiftness with which the triple-disc set was made available, scarcely a month after the show while the band was on tour, precludes even the notion of any “sweetening” or phonying up of the sound. There’s no annotation and the packaging is extremely spare; this is the sort of fan-oriented set that is usually offered over a group’s website, but in this case it’s also gotten a commercial release. But the music is what matters here, and anyone buying this set pretty much knows who and what he’s listening to without the need of a program. 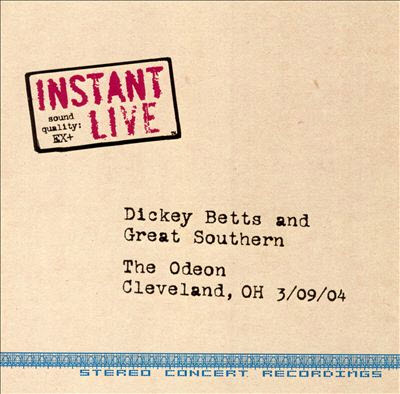