Three years after the issue of his landmark solo recording, Highway Call (and countless inbred brawls and unholy wars among the Allman Brothers), guitarist, singer, and songwriter Dickey Betts released the debut by his “other” band, Great Southern. Attempting to capture the loose, easy feel of Highway Call and combine it with the more blues-driven sound of the Allmans, Betts was largely successful though the record does suffer a tad from overly slick production. Evident from “Out to Get Me,” the very first track, is Betts‘ trademark slide guitar burning a hole through the center of the mix. The undertone of the album is the shuffle, both country and blues, aided in large part by Topper Price‘s harmonica and the able second guitar of Dan Toler. But the feel is all Betts. He stretches out the stinging boogie of “Run Gypsy Run,” with dual leads, a killer pre-verse riff, and a solid “Ramblin Man”-style melodic line in the heart of his blues. Perhaps the hinge piece on the album in on its third track, “Sweet Virginia” (not a cover of the Rolling Stones‘ track). Here, Betts‘ slide work is easily and lilting as it undergirds a sleepy country tune with a killer backbeat. Nostalgia, or at least the previous, is the backbone of Betts‘ sentiment as his vice rings through the guitars and rhythm section with conviction and a sureness that only comes out of the finest country-rock music (think Creedence Clearwater meets the Allmans). Ultimately, this album, with its funky New Orleans basslines and second-line percussions, is another restless country-soul set from Betts. And though more guitar driven than Highway Call (fiddle godVassar Clements is not Betts‘ foil here), its songs hold as much soul and aplomb if not the same deeply held convictions that made the previous album the classic it is. Nonetheless, Great Southern is a very fine album that despite its polish holds a wealth of fine songs and truly astonishing playing within its grooves. 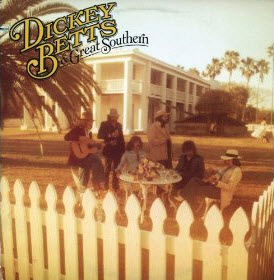