Having Dickey Betts for a father and guitar god Duane Allman for a namesake would be enough to make a kid ditch any thoughts of becoming a rock guitarist and embark on an entirely different career path, like studying to be an accountant or something.

And, for a time, 34-year-old Duane Betts thought about doing just that.

“I grew up on the road with the Allman Brothers, and I was always really intrigued by the business side of it,” he told me one day this week from his mother’s home near Malibu. “When I was a teenager I was really into numbers, so I was interested in how many people came to the shows, how many comps there were, the numbers from night to night. People thought I would become something other than a musician.”

But the electric guitar was imprinted in his DNA, and it was hard not to take the musical torch that had been passed to him by the mere fact of being named after the legendary Duane Allman, who was killed in a 1971 motorcycle accident. So young Duane Betts is now one of the trio of guitar-slingers in his dad’s band, Dickey Betts and Great Southern, headlining Saturday’s opening night of the Marin County Fair.

Naturally, they’ll be playing the instantly familiar songs that his father wrote that helped make the Allman Brothers one of the great Southern rock bands — among them the Grammy-winning “Jessica,” “In Memory of Elizabeth Reed,” “Blue Sky” and “Ramblin’ Man,” the Allmans biggest commercial hit.

Whether he’s playing with Great Southern or one of his own groups, young Betts is faced with the inevitable comparisons with his dad, who’s ranked No. 61 on Rolling Stone’s list of the 100 Greatest Guitarists of All Time, and his late namesake, who’s been ranked as high as No. 2 on the same list, behind only Jimi Hendrix. As a young musician, Betts learned to deal with it, but it hasn’t been easy for him.

“Duane Allman was an amazing guitarist, probably the greatest slide guitarist of all time,” he said. “It’s an honor to be named after him, and I accept it, but it’s kind of heavy. And its heavy when you’re a musician and your dad’s in the Rock and Roll Hall of Fame. But at a certain point, you have to remember that you’re not trying to surpass them. Your just trying to make music and have a band and a following. You don’t have to compete with them, and with all their accolades. It’s a lot of unnecessary pressure to put on yourself.”

Betts’ mother, Paulette, the fourth of Dickey Betts’ five wives, was once personal assistant for Cher, who had famously been married to Gregg Allman. The only son of the four Betts children, Duane didn’t have what you would call a normal childhood, growing up on the road with the Allman Brothers Band. On tour he was home schooled and didn’t have the benefit of having other kids around.

“It was great; I loved it,” he said. “But none of the other kids who were around were on the road full time like I was. I had my tutor with me, and it was mainly me and the adults. I didn’t get to socialize with kids my own age. I had to make up for that later.”

He made up for that by enjoying what he calls “my high school years” after he’d gotten his GED and moved from Sarasota, Fla., where his father lives, to his mother’s neighborhood in Malibu, where he played in bands with the sons of other celebrities, many of whom had been high school friends.

“That band had a wide social scene and a large following locally,” Betts said. “We made a record in Nashville and did some dates with Government Mule.”

In the early 2000s, Backbone69 was a senior member of a scene developed by a half dozen quality bands creating a surprising “Malibu sound.”

“At first listen, the sound that most of these bands play may seem incongruous with Malibu’s image,” wrote Neil Strauss in a 2003 piece in the New York Times. “Local rockers all dabble in Southern and classic rock, with moments that recall the Rolling Stones at their twangiest and Lynyrd Skynyrd at its rawest. Unlike most teenagers, the members of these bands didn’t grow up on pop radio. They grew up watching their parents perform.”

But the rise of Backbone69 was halted abruptly, and tragically, when Williams, who Betts describes as “the chief of the whole tribe,” was killed in a 2001 car crash.

Betts, Orbison and Adler regrouped in a band called Whitestarr, which was signed by Atlantic Records (and later dropped), toured with Kid Rock and was featured on the TV show “The Rock Life,” a gossipy rockumentary on VH1. But the group was troubled and eventually disintegrated. 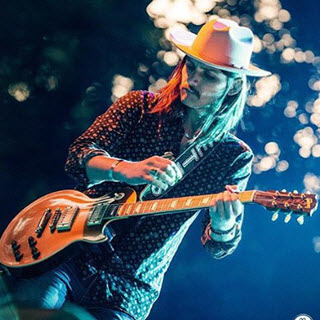